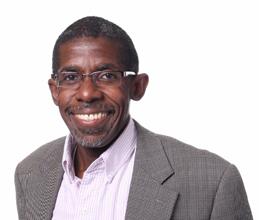 Dr. Abel received his medical degree (MB.BS) with Distinction from the University of the West Indies –U.W.I. (first in the history of the U.W.I.), then went to Oxford University as a Rhodes Scholar where he obtained his D.Phil (Ph.D.) under the mentorship of Professor John Ledingham in the Nuffield Department of Medicine. Following his doctoral studies, he completed his internal medicine residency training at Northwestern University in Chicago where he served as Chief Medical Resident. Dr. Abel was recruited to the Beth Israel Deaconess Medical Center as an endocrinology fellow in the Harvard Medical School Longwood Area Endocrinology Program. While there, he served with distinction and received a Robert Wood Johnson Foundation Minority Faculty Development Fellowship. He subsequently remained on the faculty of Harvard and became the co-director of the Endocrinology Fellowship Program at the Beth Israel Deaconess Medical Center. In 2000, he was recruited to the University of Utah initially as an Assistant Professor but was promoted within 3 years to Associate Professor with tenure in the Department of Medicine and Division of Endocrinology, Metabolism and Diabetes. In 2007, he was appointed as Chief of Endocrinology, Metabolism and Diabetes at the University of Utah and promoted to Professor of Medicine and Biochemistry in 2008. Additionally, he was a Senior Investigator in the Program in Molecular Medicine where he held the H. A. and Edna Benning Presidential Endowed Chair in Diabetes and Endocrinology. He established and oversaw the Metabolism Interest Group (MIG) at the University of Utah, which was awarded a P30 award (NHLBI) and a T32 training grant (NIDDK). By May 2013, the MIG had grown to an interdisciplinary program in metabolism with more than 20 faculty members, securing in excess of $16M annually in extramural research support. In June 2013, the University of Iowa recruited Dr. Abel and appointed him as the Chief of the Division of Endocrinology and Metabolism in the Department of Internal Medicine and the Director of the Fraternal Order of Eagles Diabetes Research Center (FOEDRC), where he holds the John B. Stokes III Chair in Diabetes Research. He has focused his efforts to expand the diabetes research center and to coordinate diabetes research and clinical activities across the University of Iowa, increasing its international stature through recruitments, endowed chairs, and implementation of enrichment programs, such as a pilot and feasibility grant program. With over 100 members, the FOEDRC collectively receives more than $50M of extramural support each year; in addition to a recently awarded $2M T32 diabetes research training grant (NIDDK).  In January 2016, Dr. Abel also became the Chair/DEO of the Department of Internal Medicine and holds the François M. Abboud Chair in Internal Medicine.

Dr. Abel has had a distinguished career in endocrine-related research. As a post-doctoral fellow in the laboratory of Barbara Kahn he performed seminal studies that established the critical link between adipose-tissue glucose transporter (GLUT4) expression and whole-body insulin resistance, which was published in Nature. Subsequent studies in this model by Dr. Kahn have led to the discovery of a novel adipokines including retinol binding protein–4 and a novel class of lipids that may be involved in the pathogenesis of insulin resistance and diabetes. As a member of the Thyroid Unit at the Beth Israel Deaconess Medical Center, Dr. Abel carried out landmark studies that defined the role of the beta-2 isoform of the thyroid receptor in the regulation of the hypothalamic-pituitary-thyroid axis, recognized by the Van Meter Prize of the American Thyroid Association in 2001—the highest award given to young investigators by that society.

Dr. Abel’s pioneering work in the area of glucose transport in the heart helped to foster his current research interests: the molecular mechanisms responsible for cardiac dysfunction in obesity; type 2 and type 1 diabetes; and the role of mitochondrial dysfunction in the pathogenesis of insulin resistance, obesity and its complications. Recent contributions have included an elucidation of the impact of oxidative stress on mitochondrial bioenergetics in obesity and diabetes and the identification of novel regulation of mitochondrial integrity in the heart by insulin signaling. Additional studies have focused on the contribution of hyperinsulinemia to cardiac pathology in diabetes and obesity, regulation of autophagy by insulin signaling and its role in diabetic cardiomyopathy, and mechanisms linking insulin signaling and substrate excess to the regulation of mitochondrial dynamics in the heart. Over the 10-year duration of the Animal Models of Diabetes Complications Consortium, Dr. Abel’s laboratory played a vital role in defining and validating new standard mouse models of diabetes cardiovascular complications. Dr. Abel’s research program has been continually funded by the National Institutes of Health since 1995, and also by the American Heart Association (AHA), the American Diabetes Association (ADA), and the Juvenile Diabetes Research Foundation (JDRF).

In 2016, the AHA designated a team from the University of Iowa and the University of Utah as a Strategically Focused Heart Failure Network, providing more than $3.8M for their work, including $1M of that to fund Dr. Abel’s laboratory. The team comprising Abel and Drs. Craig Selzman, Stavros Drakos, Josef Stehlik and Dean Li from Utah, will test the hypothesis that improving the efficiency of cardiac glucose metabolism may predict cardiac recovery in heart failure. By identifying these predictors in patients and in populations, they will shift focus from the standard search for why a patient may worsen and thus hopefully discover new approaches in treatment.

Dr. Abel is a world-renowned speaker and expert, having presented his work at numerous national and international symposia.

He was appointed to the Josie Johnson Professorship in Molecular Biology at the University of Utah in 2007 and a Benning Endowed Chair in 2012. Dr. Abel was the recipient of the 2012 Gerald Aurbach Award of the Endocrine Society for Research Achievement. The University of Iowa bestowed Dr. Abel with the John B. Stokes III Chair in Diabetes Research (2013) as well as the François M. Abboud Chair in Internal Medicine (2016). He is an elected member of the American Society for Clinical Investigation (ASCI, 2009), Association of American Physicians (AAP, 2011), National Academy of Medicine (NAM, 2015), and the American Clinical and Climatological Association (ACCA, 2017).

He is a Fellow of the American College of Physicians and a Fellow of the American Heart Association. He served as president of the Society for Heart and Vascular Metabolism (2009-2012). He served as a member of the Council of the Endocrine Society and the Board of Directors of Keystone Symposia. He served as Chair of the Board of Scientific Counselors of the NIDDK, the immediate past-Chair of the Scientific Advisory Committee and immediate past-Chair of the Board of Directors of the Sarnoff Cardiovascular Research Foundation. He serves as a council member for the North American Section of the International Society for Heart Research (ISHR) and is currently a member of the Advisory Council of the National Heart Lung and Blood Institute. He was elected as President-elect of the Endocrine Society in 2017.

Mentoring the Next Generation

Dr. Abel is committed to mentoring the next generation of endocrine researchers and biomedical scientists. Throughout his career, he has trained more than 24 post-doctoral fellows and 8 PhD students, many of whom now hold independent faculty positions, and supervised numerous graduate students, undergraduates, and medical students in his laboratory. He has mentored summer students sponsored by the Endocrine Society and the AHA. He has served as the program chair for the annual workshop of the Network of Minority Investigators (sponsored by the NIDDK), which strives to increase the success of minority investigators in biomedical research. He directed the Medical Student Research Program at the University of Utah School of Medicine. Dr. Abel has served on the Minority Affairs Committee of the Endocrine Society and chaired the NIDDK “B” study section, served on the Howard Hughes Medical Research Institute Medical Student Research Fellowship Review panel, and served as a member of the council of the Western Section of the American Federation for Medical Research, the Western Society of Clinical Investigation (WSCI) and the ASCI. In 2012, Dr. Abel became the Principal Investigator of the NIDDK-funded Future Leaders Advancing Research in Endocrinology (FLARE) program through the Endocrine Society, which provides mentorship toward increasing the pipeline of underrepresented groups into productive careers in endocrinology and diabetes research. In recognition of his exceptional mentoring of students and post-doctoral scholars, Dr. Abel was honored with the 2011 Distinguished Mentor Award from The University of Utah; the Distinguished Mentor Award from the Iowa Center for Research by Undergraduates (ICRU) at the University of Iowa in 2016; and, in 2017, the National Institutes of Diabetes Digestive and Kidney Disorders (NIDDK) presented him with the NMRI Medallion for his years of significant service and contribution to the network. He continues his passion and mission at the University of Iowa serving as a mentor for the Medical Scientist Training Program (MSTP), Physician Scientist Training Pathway (PSTP), Sloan Center for Exemplary Mentoring, Iowa Biosciences Academy (IBA), and much more.﻿